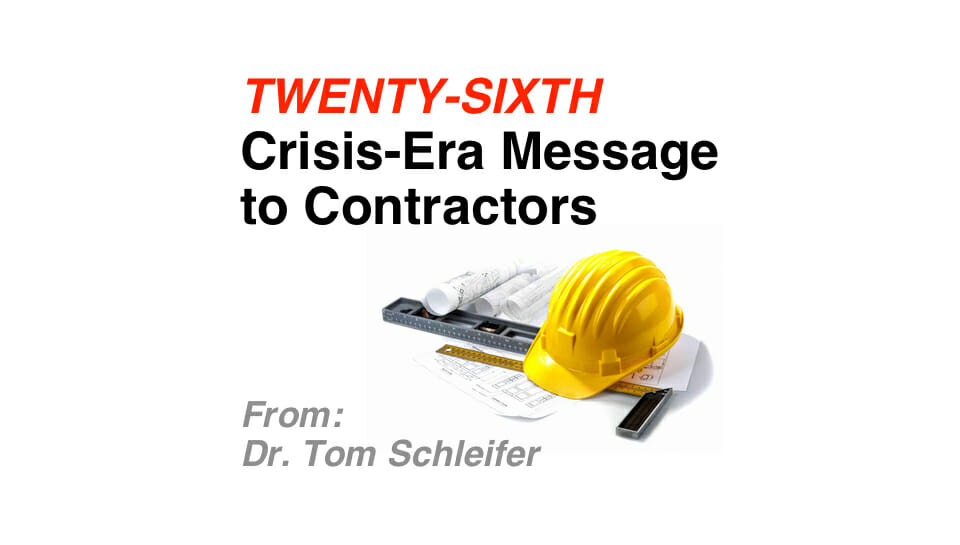 I was going to start this message off with a positive note that perhaps we might be leveling off or at least might be seeing a little light at the end of the tunnel, but had to temper that because as of this writing the stock market was having its worst three days since 2008. We have had a difficult six months, and I think most agree that it would be nice to get off this rollercoaster. Fortunately, the economy always recovers which leaves us with the question of when. It is almost impossible to plan around the unknown, but that is where we are. We need to work with the limited information we have. The minimum length of the construction market downturn indicates most construction enterprises will be downsized. Some voluntarily and hopefully profitable. Other involuntarily and painful. The latter will be less profitable with some losses. You will find detailed information about those issues in prior messages.

The depth of the downturn will primarily be affected by its length which is the element we know the least about. The best gauge is the US economy with various predictions out there for recovery to gain traction sometime after the second quarter of next year or later. That would put the rebound of the construction market well into 2022 at the earliest. At this point in the cycle the profitable work coming forward from the strong pre-pandemic market is being completed and aggressive competition for the lessening amount of work will drive margins down. The decision to downsize is overdo and no action is a decision to challenge the market. Enlightened firms will voluntarily downsize with a total concentration on managing risk and maximizing profit from the lesser amount of work. It is critical to discover the volume the firm can profit at because it can then profit throughout the unknown length of the downturn. The next target we will be looking for is a relaxation of aggressive competition when the construction market grows back to or near 2019 size which is likely a year plus away.

All of the world economies have experienced the deepest contraction since WWII and for the first time the US economic condition is connected to a global recession, therefore, projections of the recovery will be impacted by international issues. Starting in the middle of the last century, the developed nations began to interact with each other commercially. While imports were common prior to that, a more complex supply chain of both raw materials, manufactured goods, and components resulted in almost a dependence on efficient and fair trading among nations. Our trading partners are universally suffering the same cause and effect of this pandemic as we are and the varying rates of their economic recoveries can impact the recovery of certain sectors of our economy which can have a domino effect on other sectors. There is no precedence for this and, therefore, no model to project from. What we are left with is following activities in other nations that may impact aspects of our recovery and then speculating on potential interactions that may evolve.

To name just a few of the international economic issues of interest, in no particular order:

All of this may be complicated by signs of unrest with other nations such as:

Our economy is impacted by uncertainty and when you combine this with a contentious election just two months away, violent protests across the country, and national debt approaching 100% of GDP it is difficult to forecast when to expect a healthy economy. Enlightened construction professionals will brace for the worst case and celebrate if it does not last that long

Next week: A Return to Reader’s Questions and Comments. Send questions/comments to tom@schleifer.com.

To assure you will continue to receive the free weekly Crisis Message send your email address to tom@schleifer.com.

Note: Information on  overhead management can be found on letstalkbusiness.net click on “Manual”, then Managing Overhead in the table of contents