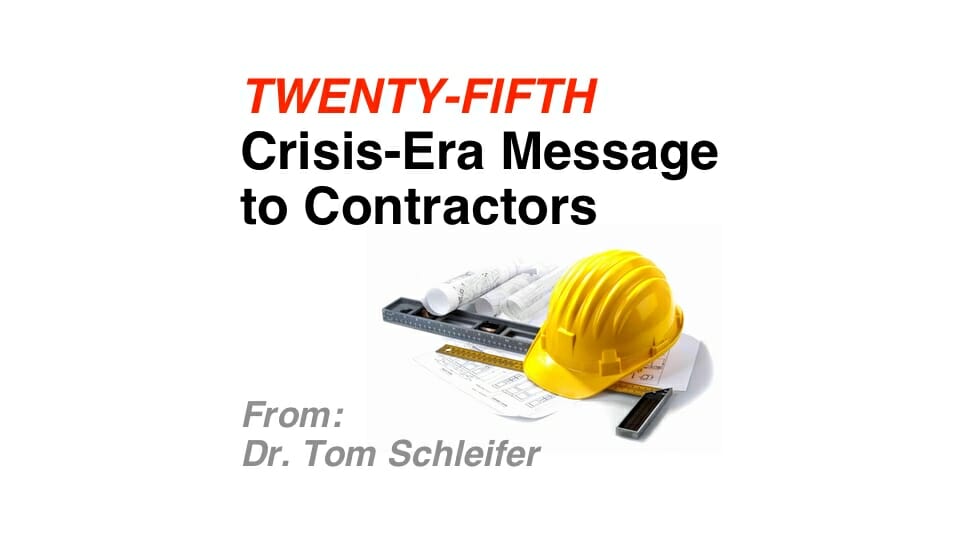 Question: Dr Schleifer, With less work at slimmer margins, I’m not sure how anyone will “continue to profit”. Seems like a contradiction. Can you explain?

Background and Answer: I hope by now everyone realizes that the 2020 US construction market will be less than 2019. “That is debate as to how much less as the data takes time to be announced, and we still have four months to go. The general speculation is 6% to 10% less and my estimate is greater than 10%. ( Doge reports “The US commercial and multifamily construction starts plunged 22% during the first six months of 2020”)The good news is that much of the work in 2020 was procured in the favorable pre-pandemic market and should be profitable; less the costs of the new COVID job-site safety protocols unless they are reimbursed. (Reimbursement is not a certainty and, if that develops into a legal battle, fees could be as much as the costs being requested.) The reduction in available work in 2021 is also being debated with the most optimistic projection remaining at 5% to 8% less than 2020 with other projections at more. As to when the construction market may turn around and begin to recover, the optimistic projections are during the third quarter of 2021 with worse case projections well beyond that, into 2022 and potentially longer.

Suffice to say there will be less work for at least another year from now which means every construction enterprise will voluntarily downsize (which is unlikely) or aggressive competition for the lesser amount of work will drive down margins as it has for every downturn since WWII. Companies that refuse to downsize will maintain their overhead, fight for the lesser amount of work and, if history repeats itself, will suffer reduced profits; some will incur losses, and the business failure rate will increase.

Aggressive competition often leads to some optimistic pricing at break-even or worse which many contractors will decline to participate in so they will reluctantly be forced to downsize, will settle for a reduction in profit percentage, attempt to maintain their overhead as long as possible, and may eventually be forced to reduce overhead or suffer losses. Others will do the same thing but cut overhead immediately. These firms will earn modest profits through the downturn and if it gets any worse than anticipated will reduce overhead again.

There are also a reasonable number of contractors who have embraced the flexible overhead concepts and will reduce overhead immediately and painlessly while maintaining their core management team untouched and productive. These contractors will willingly downsize in the normal course of business, treating this crisis as just another cycle in their cyclical industry. They will earn reasonable but reduced profits and will avoid losses by resisting cut-rate work and downsize further if necessary. It is difficult to know how many firms are in this category because the only information available is that immediately after the 2009-2012 recession the requests for information about flexible overhead climbed sharply and the dozens of seminars on the subject were crowded. The requests for information are climbing sharply again with firms determined not to go through another cycle in the future unprepared.

Few construction firms will break any profit records during this market cycle. Some enlightened firms that refuse to take cut-rate work will struggle but earn modest profits. Others will downsize immediately and profit through this downturn without struggle because for them this is “business as usual”.  Some will do neither and potentially suffer losses. It will be interesting to learn how many in each category, but that data will not be available for years. I hope this is responsive to your question.

Question: When you say “those that are financially weakened during the downturn” – isn’t that everybody? How can anyone profit during this sudden market contraction?

Answer: Many construction enterprises profit during market contractions. Our industry, unlike most, has a wide variance in earnings with the difference between the highest profit and lowest profit firms being more than double. It defies logic that a firm performing the same type of work in the same area with access to the same resources would generate twice the profit of another but that is the case. Some firms are conservatively managed maintaining some cash reserves, and on the other end of the spectrum some operate almost entirely on borrowed funds. The financial “strength” of a firm is a combination of the earnings and how the earnings are managed. In a downturn this reality defines the distinction between the “staying power” of firms that can afford a reduction in profit and even some modest loss and still be profitable for the year, and those that cannot.

It does not matter if it is a high or low earning company, if  it has no losses during a downturn and reduces its cost of doing business (overhead) when necessary, the reduced profit that each earns improves its financial condition (just not as much as it would in a healthy market). Therefore, even the weak firm going into a downturn can marginally increase equity (unless the interest expense on the debt of the weak firm is extreme). While there are no definitive studies to prove it, there is an assumption that the higher-earning firms are better managed which would be a distinct advantage in navigating through a market decline. This advantage implies that in a downturn a well-managed firm might be more skilled at minimizing the inevitable reduction in margins than a lessor earning firm.

To assure you will continue to receive the free weekly Crisis Message send your email address to tom@schleifer.com.

Note: Information on  overhead management can be found on letstalkbusiness.net click on “Manual”, then Managing Overhead in the table of contents